A Private Talk On Honesty

The ancient Greek philosopher Diogenes is said to have wandered the streets of Athens with a lantern looking for an honest person. Since Diogenes' most remarkable teachings have become known as the Cynic school of philosophy,* I assume that his wanderings were in vain.

Honesty is a very delicate subject to talk about. In most circles, no one would ever be so tactless as to even bring it up. Pirates, criminals, swindlers and con artists proclaim their honesty most loudly. No wonder it has become a subject that tends to besmirch the speaker at its mere mention.

So I am aware that I am walking on the thin ice of the holier-than-thou, but this is an important subject. Without self-honesty, a person will substitute rationalized thinking for his or her genuine feelings. With such, the question, "What do you feel?" will evoke intellectual speculation (What should I feel?) rather than an actual experience of what is present. 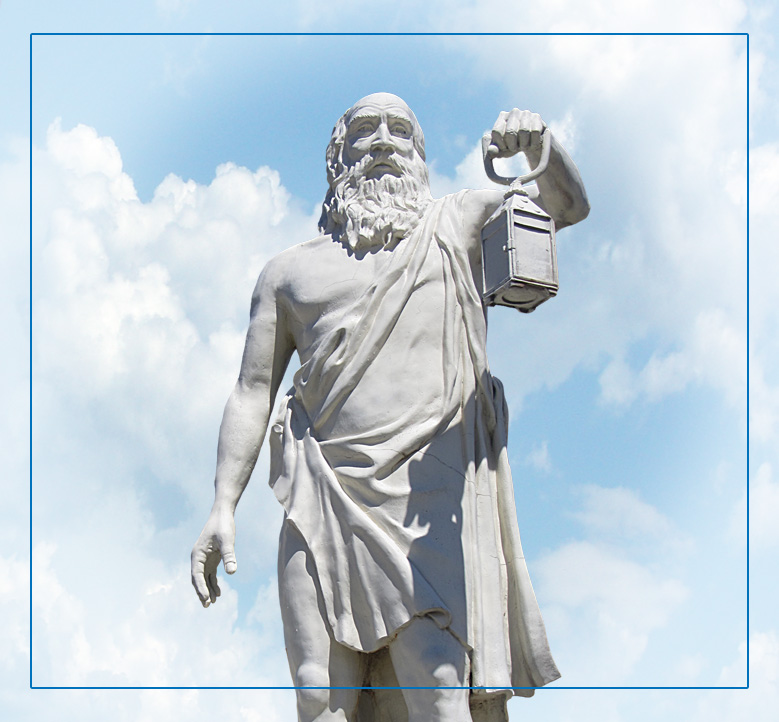 Dishonest displays of so-called "honest" feelings are often intended to deceive, manipulate or to camouflage hidden agendas, for example, Your distrust hurts me deeply. Treating others dishonestly invariably results in a lowering of respect for them. Friends we have discarded, we have first deceived. The same applies to the respect we have for ourselves and our lost selves. Dishonesty is at the root of asserted self-importance.

We seem able to lie easily about our own honesty. Some part of us automatically insists that we are honest without even inspecting what we are doing or saying. Catch children in the act and more than likely the first words out of their mouths will be, "I didn't do it!"

It seems easier to defend actions than to honestly examine them. We are quicker to attack than to admit. Admissions require courage!

Being honest is really a question of courage – courage enough to face what we fear. This gets lost in the smoke screen of deceptions that is used to justify dishonesty. Whenever we accept that there is good reason to be dishonest – hardship, desperation, depression, ignorance, victimhood, etc. – we increase the evidence for fearing what we are avoiding. And what is it? Only this: Fear is a BELIEF in our inadequacy to deal with something. And that belief precedes any evidence of failure we have collected.

So, do we have the courage to face what we fear? This is life's most severe test – failure leads to unawareness.

Unawareness arising from fear is why people are dishonest. The belief responsible for the fear may be lost in confusion or hidden in the shame of humiliation. The invitation is to avoid, to forget, to go stupid, and the urge to be right further sanctions our ignorance.

What a breath of fresh air to face a dishonest act and say, "I did it because I was afraid. Period!" That is the first step toward discovering the hidden fear. What a relief! There is no longer a need to struggle to change the world or circumstances or anybody else. You can work on yourself. You need only to gather your courage and look for a BELIEF you have about your own inadequacy. At the bottom of every dishonest act, there is at least one.

Here is a remarkable observation that has profound implications for the future of the world: As people handle their transparent and hidden beliefs, they become naturally more honest.

Eventually, compulsive pretense deadens the ability to deal honestly with others or to be honest with oneself. Every time one is reminded (or accused) of pretending, the response is to become defensive and critical. Eventually one loses touch with his or her genuine feelings. Pretenders create false identities that are staged, egocentric, and insensitive.

In the end, pretense strengthens the fear it was meant to conceal.

Pretenders criticize, gossip about, and covertly attack people whose honesty reminds them of their own pretenses; eventually this becomes a compulsive behavior pattern. They assume that everyone else is also pretending, so their attacks specialize in exposé.

Pretenders are good people frightened into bad actions. They operate on hidden agendas. To lessen their sense of guilt, they project onto others identities that deserve to be cheated, swindled, robbed, lied about, deceived, or defrauded in some way. Most of the definitive catalogs describing the antisocial, criminal minds, sinners, etc., are the compilations of pretenders. (It is a sensible wisdom to view the accuser with some suspicion.)

People who cannot trust themselves become the fugitives of society. They punish themselves indirectly by putting their trust in the people who are least likely to return it. Then they parade the fact that they have been betrayed. This eases their own burden. In place of personal integrity, they rely on the grand absolution of sin: Everybody does it! Their personal lives are a whirlpool of bad relationships and failed projects. In the end, pretense strengthens the fear it was meant to conceal.

You have done and can do no wrong I do not share.

As disagreeable as it may be to contemplate, the dishonesty I encounter in the world is a reflection of my own pretense. Pretending that I am honest and that others are not doesn't work. That is the trap that awaits those who will not assume ownership for the world's dishonesty.

We are all dishonest as long as we do not compassionately work to correct the collective dishonesty of the world. How? Punishments and threats of exposure are poor answers. A better answer is for each of us, in our personal lives and our dealings with others, to set a courageous example of honesty – even when it means exposing ourselves to the criticism and judgments of pretenders.

Honesty is a path that leads to happiness. Becoming honest is an act of self renewal.

When we summon the courage to take ownership of our experiences, to see them just as they are, to feel them, we will recover the blueprints of our lives. We will face our fears and find the transparent beliefs that create them. Becoming more honest with ourselves means introducing more honesty into the collective consciousness of the world, and this lays a foundation upon which an enlightened planetary civilization can be built.

The result of living honestly is feeling and sharing – compassion and empathy. There is a joy in willingly integrating with the consciousness of others. Attention and creative energies combine with a synergetic result. Networking and new opportunities present themselves. Relationships develop that are rewarding and provide a measure of security that no amount of money, power, or fame can provide. Valid trust arises.

cour.age
n. the attitude of facing and dealing with anything recognized as dangerous, difficult, or painful, instead of withdrawing from it

in.ad.e.qua.cy
n. not equal to what is required or considered sufficient

pre.tend
vt. an effort to experience or display something different from what one feels or believes (in regard to self, others or events)

When you find yourself wanting to explore the inner workings of consciousness, wanting to become more familiar with the creation that you regard as self, read Living Deliberately.