In The Light Of Day

It was probably about 10:00 at night. I was five or six years old, and there was a witch outside my bedroom window. She was riding on the howling wind that I could hear blowing around the house. I knew she was there, because I could hear her scratching at the window pane, and I could see her silhouetted in the faint glow of the backdoor neighbor’s porch light. I didn’t know what she wanted, dressed in black and waiting for something. Maybe she was waiting for that thing in the corner. It was sitting in a particularly dark spot of my room and would occasionally shift position. Like an animal that can’t sit still for too long. I couldn’t prove it, but I’m pretty sure it was slowly inching its way closer to me. I didn’t see any teeth, but there were some very large paws. I was too scared to do anything but lie there. If I was very, very still, maybe the witch and the monster would think I was sleeping and they would go away. 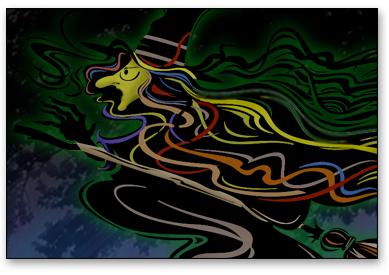 Right about then my dad came in to check on me. He was surprised that I was still awake and asked me why. I told him about the witch and the monster. He said he knew just what to do to make them go way. He magically turned on the overhead light and what was a circling, teeth-gnashing monster became a pile of clothes arranged just so. Then he picked up a flashlight, and with me at his side, pointed out the unique arrangement of tree branches brushing up against the window. I felt better.

The next morning we talked again about the things that gave me such a fright the night before. Amazingly in the light of day these things had completely lost their power over me. In fact, we had a bit of a laugh about it and talked about the power of the unknown.

I have a friend who says he’s scared to death of what he’s hiding from himself. He keeps his days busy with work, and his nights are filled with television, books and the worldwide web. On the weekends he plays sports, goes to the beach or boating with his family, or takes on huge projects around the house. Anything to keep himself from slowing down. If you’re busy with all the things on the surface of life, you don’t have any time for introspection. He knows he has issues. He knows that there are things that he is hiding from himself, but he thinks that they are big and scary and overwhelming.

The major things that are keeping you from greater success are the unknowns in your own mind.
—Harry Palmer

What he doesn’t realize is how easy it is to get rid of these feelings of doubt, insecurity and unconnectedness. It’s just about as simple as turning on a light.

During The Avatar Course you get a chance to take a look at your life and the beliefs you have used to shape it. If there are some beliefs that no longer serve you, then you can get rid of them and replace them with beliefs you would prefer. Maybe instead of “There are scary, unknown things out there that might hurt me,” you could create, “I am thrilled with the prospect of learning new and different things,” or “Life is a fun and exciting adventure.” Sure it takes some courage, but a wonderfully safe environment is created by trained and experienced Avatar Masters.

I’ve had a good laugh at some of my modern day monsters once the Avatar exercises have helped me bring them out into the light. And just like that morning so many years ago, the fears of the night before have lost all of their power over me. When my friend decides he’s ready to stop running from his monsters, Avatar will be there to help him. Life can be so free and easy without the extra weight of those burdensome beliefs.

Jim Becker has been an employee of Star’s Edge International since 1994.

The Avatar Journal would like to thank Jim for sharing his story.
Read more Avatar experiences at AvatarResults.com